You Are Here: History of IBF 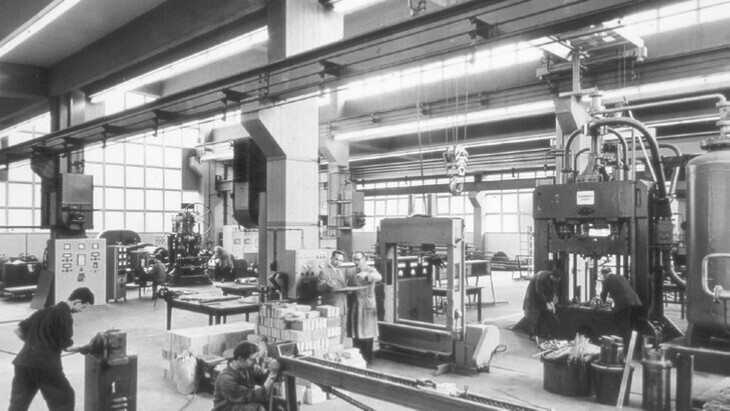 Until the thirties, the subject of metal forming at RWTH Aachen was represented by the institute of Hüttenmaschinenkunde. The idea of establishing a separate institute to address the concerns of the forming industry goes back to Professor H. Hoff. He eventually put his thoughts into actions and founded the Institute for Metal Forming.

In the year 1937, the department, which, at that time, was located in the rooms of today's Steele Institute, was handed over by Rector Professor O. Gruber to Professor H. Sedlaczek.

Professor A. Pomp replaced Professor Sedlaczek as Institute director in 1940. Under his direction it soon emerged that the hitherto existing facilities did not match with the requirements. In collaboration with A. Wimmer he developed new building plans that unfortunately had to be postponed due to his death on October 13, 1953.

Professor Eilender directed the professorship provisionally until Professor H. Sedlaczek became head of the institute in 1955.

He seized on the new building suggestions immediately and achieved an early start of the excavation works. In the fall of 1956, work for the first construction stage commenced – proving grounds and shop. The second construction stage – office and laboratory building – followed in the spring of 1957. Unfortunately, Professor Sedlaczek died while on a journey through Japan on October 7, 1958 and hence he was not able to witness the completion of the new institute facility.

In 1960, Professor M. Vater was appointed to a professorship at RWTH Aachen and assumed direction of the institute. On his initiative, a forming congress was held for the first time in February 1965. It was meant to induce a closer contact between practical application and research. Another seven congresses followed before his retirement in the spring of 1972. During the following summer term he attended the institute as an emeritus but had to retire due to health reasons in autumn. He died on March 3, 1974.

From 1972 to 1974, Professor H. Winterhagen directed the institute temporarily.

In the spring of 1974, Professor R. Kopp assumed the position of director of the Institute of Metal Forming. Under his leadership, the institute grew significantly in size – in the amount of space used as well as in the number of staff. It is now equipped with a technical proving ground 1300 square meters in size, which contains high-capacity machinery, an administration building with an integrated computer network, and a designated institute workshop.

Since spring of 2005, Professor G. Hirt has been head of the Institute of Metal Forming.