You Are Here: Sheet Metal Testing

For process-oriented material characterization and validation of forming simulations, the IBF offers a wide range of sheet metal testing methods.

In addition to the equipment for uniaxial tensile tests and shear tensile tests, the IBF also has testing equipment for the determination of forming limit curves with the Nakajima test and the Hot-Gas-Bulgetest. Moreover, cross-die tests, Marciniak tests and other cup drawing tests can be carried out.

A video extensometer as well as the ARGUS system and the ARAMIS-4M system from GOM are available for strain measurements.

To determine flow curves under tensile load and material properties, the Institute of Metal Forming offers tensile tests. In this process, the specimen is drawn to fracture under quasi-static forming conditions on a universal testing machine. During the forming process, the force is measured by means of a load cell and the change in length of the specimen is measured without contact by means of a video extensometer. From this, both the true stress-strain diagram and the engineering stress-strain diagram can subsequently be calculated. The technical stress-strain diagram can be used to determine typical parameters such as yield strength, tensile strength and uniform elongation. Alternatively, it is also possible to use an optical 3D measuring system to measure local strains. This allows, for example, anisotropy and Young's modulus of the material to be determined with high accuracy. 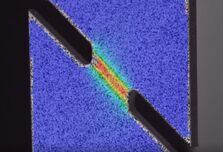 In addition to the classic tensile test, the Institute of Metal Forming also offers material characterization tests for extended sheet metal testing. By means of the shear test, yield curves can be recorded up to significantly higher strains in comparison to tensile tests. In addition, the shear test and the plane strain test can be used to determine further points of the yield locus, for example for parameterization of yield criterions. Similar to the tensile test, the specimens are tested on a universal testing machine under quasi-static conditions. However, it is mandatory that the strain is measured by means of local optical strain measurement, as this is required for correct evaluation of the tests. Based on the measured force and the local strains, corresponding yield curves and consequently points for the yield locus can finally be determined.

The forming limit curve, FLC for short, is an important material parameter in sheet metal forming. In order to determine the FLC, a cupping test on sheet metal specimens according to Nakajima is used at the Institute of Metal Forming. Different specimen geometries can be used to induce different strain states in the material. An optical measurement system is used to determine critical strain values just before the material fails. The tool including the strain measurement system can be installed in the hydraulic deep drawing press of the IBF.

The gas-based high-temperature bulge test, hot gas bulge test, is a test method developed at the IBF to determine material characteristics, in particular the biaxial flow curve, of a sheet material at elevated temperature without friction. With this method, it is possible to determine flow curve fields for modern hot sheet metal forming processes at dynamic speeds. For this purpose, a sheet metal sample is placed in the test set-up, heated conductively and then formed friction-free by nitrogen gas at an approximately constant strain rate until material failure. The continuously measured data of forming pressure and strain distribution in the pole of the bulge subsequently allow the calculation of the flow curve under biaxial load. Primarily developed for testing manganese-boron steels, current research is extending the test method to high-strength aluminium alloys.

The cross die test is an important means of sheet metal forming for testing the formability of a material. Due to the geometry of the cross die sample, a wide variety of strain states can be induced in a single test. Using digital image correlation to measure the strains of the material after the test, the sheet thinning can be determined as a function of the strain state. The cross die tool can be installed in the hydraulic deep-drawing press of the Institute of Metal Forming.

The Marciniak test, like the Nakajima test, can be used to determine a forming limit curve (FLC) of a material. Both cupping tests differ in the shape of the punch. Due to its punch diameter of just over 200 mm and the use of a drawing bead, the Marciniak tool located at the Institute of Metal Forming offers above all the possibility of testing the formability of large-area sheet metal components without material flow in the flange. The hydraulic deep-drawing press of the IBF can be used to carry out Marciniak tests.

By deep-drawing round cups, a process window for the deep-drawing process can be identified with regard to the blankholder force to be set, depending on the drawing ratio. The drawing ratio relates the area of the initial blank and the punch. It is also possible to determine the limit drawing ratio, which describes the maximum blank size with which good parts can still be produced. The cup drawing tool can be installed on the hydraulic press of the Institute of Metal Forming, or IBF for short.