You Are Here: Physical Process Simulation

The physical process simulation at the Institute of Metal Forming is mainly performed using the forming dilatometer DIL805 and the torsion plastometer STD812. With respect to temperature and forming history, the corresponding technological process conditions are reproduced on laboratory scale. This involves a combination of forming and heat treatment, or just the exploitation of simple physical processes.

After the physical process simulation, various methods can be used for the material testing of the specimens.

In modern production processes, the material frequently undergoes a series of successive forming and heat treatment operations. Combined forming and heat treatment cycles can be simulated on the DIL805 forming dilatometer. This allows the investigation of the influence of the process history on relevant material properties such as the flow curve, as well as grain size distribution and phase fractions. Highly accurate measurement systems for temperature and length change of the sample allow a precise execution of predefined cycles. Depending on the real process, the forming can be realized as tensile or compressive loading. The tests can be carried out under vacuum as well as under the atmosphere of technical gases such as argon or nitrogen. 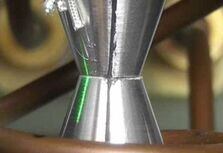 Among other methods, hot roll bonding can be used to produce cladded materials. A characterization test can be carried out on the STD812 torsion plastometer to predict and evaluate the bond formation of the material pair during the rolling process. A pair of frustoconical specimens is used for this purpose. The specimens are inductively heated and then pressed onto each other under compressive load to simulate the bond formation in the rolling gap. In the next test step, the specimens are separated from each other. The failure limit of the bond can be determined under pure tensile or torsional loading, or under combined tensile-torsional or compressive-torsional loading. The system can be controlled by displacement/angle or force/torque.

In addition, the influence of surface scaling on bond formation can be taken into account by controllable addition of technical gases.